Normally I would mark the reopening of the bass season on the 16th June with a long session but the south coast was hit but a storm with strong winds and driving rain. So I thought it wise to leave the bass in peace for one more day.  On Monday, Tuesday and Wednesday evenings I lure fished three different marks but did not have a bite never mind catch a fish. On Monday the water was still quite coloured after Sunday's storm so I was not too hopeful. But the sea had calmed down and the had water cleared by Tuesday so the conditions looked good but the fish had other ideas.

A return of strong winds on Saturday ruled out lure fishing over the weekend so I decided to return to bait fish. Late Sunday afternoon I headed to a reliable beach that will normally produce bass in daylight with a moderate surf on an ebbing tide. The wind had swung around to a northwesterly and there was still a good surf rolling in but the wind had ripped up a lot of kelp which had amassed at the eastern end of the beach in the location where I wanted to fish. I moved about 100 m further up the beach. I set up two rods, one baited with crab on a 4/0 pennel pulley, the other with a three hook flapped with crab and razor on 2/0 and 3/0 circle hooks.

About a hour after arriving I had a missed bite on the pennel pulley. There was a sharp tug on the rod but when I went to retrieve the fish was gone.

It remained quite until dusk. Then I noticed some small knocks on the rod with the three hook flapper. I picked it up, waited until I felt a stronger tug than lifted into the fish. It felt like a smallish bass and as I began to retrieve I could see the fish breaking the surface. I rapidly reeled in the slack as the fish was carried in on a breaking wave and managed to keep the line taut. A few minutes later I had it on the beach. It was a rather slim 47 cm bass. But still it was the first post-closed season bass so I was delighted. 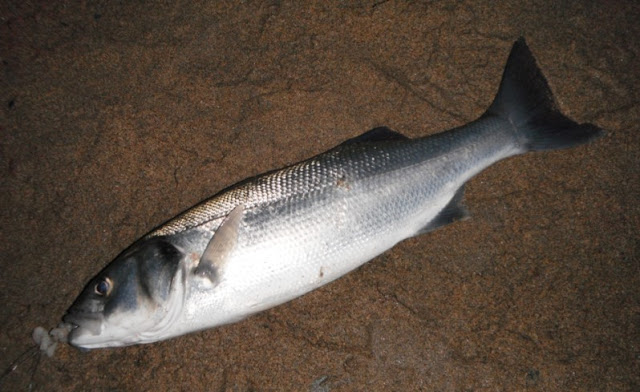 I was hopeful this indicated the fish were moving in but it remained quite for a couple of hours. At about 12.20 am I decided to have one last cast before packing up. I reeled in and put on fresh bait, focusing mostly on razor as that had picked up the first bass.

After a few minutes I noticed a tap on the rod with the three hook flapper. I picked it up but as I began to retrieve I realized there was a lot weed on the line. The northwest wind had died down at this stage and the mass of kelp that was at the eastern end of the beach had begun to drift westwards along the shore. I assumed all I had on the end of the line was a ball of weed. It was a struggle to haul it in. As the shockleader appeared out of the water I could see that the leader knot was drapped in weed so I grabbed the line and manually hauled it in. Then I spotted something was splashing about in the shallows - there was a fish on the end!!!!

I pulled the line clear of the water and hauled a good size bass on to the sand. It was a plump 59 cm fish and weighed a little over 5 lbs. 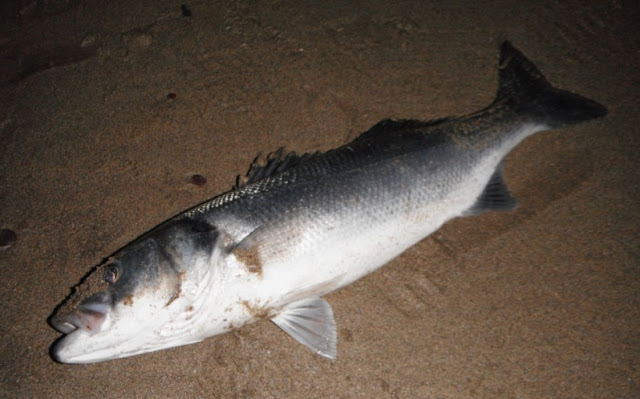 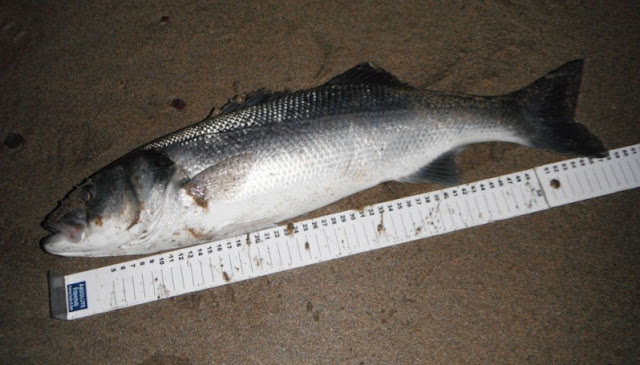 I would have stayed on longer but at this stage the surf in front of me was dense with kelp so decided it was time to pack up.
Posted by RockHunter at 13:41 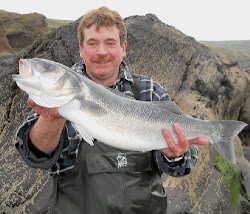